DOSBox has a number of specialised function keys that can be used to quickly adjust the program features at any time during its operation. Either when in a DOS command prompt, when running a full screen program or playing a full screen game. I will list all the function key combinations and their usage.

Like any Windows application you can switch DOSBox between Windowed and full screen mode by using the ALT-ENTER key combination.

DOSBox can be paused at any time by pressing ALT-Pause. Once paused, you can resume your activity by repeating the same combination.

In the previous tutorial I spoke about the need of using the rescan prompt command. This is needed whenever a drive, folder or file used by DOSBox was changed externally, such as by Windows Computer. Instead of typing rescan at prompt you can also use the CTRL-F4 key combination to update the cache on all your DOSBox mounted drives and images.

DOSBox has the ability to record directly to a movie file. By default the movie file will be stored in the capture sub-directory within the Users AppData, Local, DOSBox directory. There is a shortcut to this listed as Screenshots & Recordings which is in the Extras sub-folder in the DOSBox menu item within Windows start menu.

When engaged DOSBox will create an AVI movie, including any audio using the ZMBV (Zip Motion Blocks Video) codec. It will be named based on the active DOS program’s file name that is currently active. While the movie recording is designed mainly for recording games and demos, you can also use it to record DOS prompt activity.

To successfully record a DOSBox movie you must first make sure you have installed the ZMBV codec to your computer. Again, Vista users should run the codec install shortcut using the ‘Run as Administrator’ option. 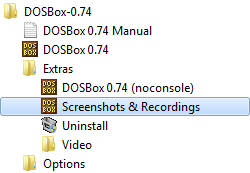 You can save a screenshot of DOSBox’s content at anytime by using the CTRL-F5 combination. All captures will be stored in the default DOSBox captures directory. This can be found through a shortcut listed as Extras, Screenshots & Recordings within the DOSBox Windows start menu.

CTRL-F6 will engage audio recording for DOSBox. You can initiate this at any time, even when there is no audio output from DOSBox. All audio will be recorded and saved as a standard WAV file and stored in the Extras, Screenshots & Recordings DOSBox menu item. The WAV audio format is uncompressed and widely supported. So you can easily use any audio converter program to compress and convert the audio into any format you wish, including MP3.

If you are looking for an audio converter, most popular CD-DVD burning packages include some form of audio conversion tool.

In Roxio Creator you can use the Sound Editor’s export function, while Nero has the included WaveEditor program. The free and open sourced Audacity would be another popular choice.

At anytime in full screen or windowed mode you can terminate the DOSBox application by using the CTRL-F9 combination.

By default DOSBox will automatically detect and adjust its emulated speed to the DOS program it is running. Occasionally it gets this timing measurement wrong so DOSBox gives you the option to manually tweak the speed the speed settings.

ALT-F12 will remove all speed restrictions imposed by the emulation

Occasionally you will run a DOS program that has inbuilt mouse support. Many newer adventure games fall into this category. If a program supports the mouse, DOSBox automatically locks your mouse into its program window for exclusive usage. If you wish to restore the mouse back to general Windows usage press CTRL-F10.

* Note, Windows Vista users will need to run DOSBox using the ‘Run as administrator’ if you wish to record or capture. You can find this option by right clicking the DOSBox program shortcut in Windows start menu.

24 thoughts on “DOSBox Keys and Functions”