PCem is an IBM PC emulator for Windows and Linux released under a GPL license. Unlike other solutions such as DOSBox or SCUMM, it doesn’t simulate an operating system or game environment. It is a classic emulator designed to emulate 8/16/32 bit x86 hardware used by IBM and other clone manufactures. Therefore it requires originals of both the machine BIOS and compatible operating system to get working.

The aforementioned has both good and bad points. By depending on an authentic BIOS, it allows for a more accurate and nostalgic emulation. However, this means it suffers from all the archaic quirks and configurations that x86 hardware suffered with during the era.

For this reason, I have chosen to emulate a Tandy 1000 personal computer running MS-DOS version 2. It is a well-documented and simple system with a lot of resources online. In this guide, you will learn how to setup the emulation in PCem. And how to convert zipped archived MS-DOS programs hosted online into a floppy disk image for use with the emulation. I will also assume you have some basic knowledge of DOS or Windows Command Prompt.

So we begin by downloading PCem, I will be using PCem v12 for Windows. It is a portable application and is usable from any directory.

Also worth looking at is the readme.txt that lists all the hardware that PCem emulates.

Just like the early x86 era, PCem is far from user-friendly. When you start PCem for the first time, it will exit because it cannot find any ROMs to use.

The Tandy 1000 was a series of 16-bit x86 MS-DOS consumer PCs created by Tandy Corporation (RadioShack) from 1984 until the end of the decade. You can download the Tandy 1000 ROM trom102.zip from Tvdog Archives and copy its single ROM file TANDY1T.ROM into the PCem rom\tandy\ directory. According to the PCem readme.txt, you need to rename TANDY1T.ROM to tandy1t1.020.

Running PCem will now automatically launch the Tandy 1000 emulation. But it may take a while as it’s accurately emulating the rather slow boot of a 4.77 MHz 8088 CPU from 1979. But the emulation still lacks an operating system, so it doesn’t do much except to throw an error prompt. 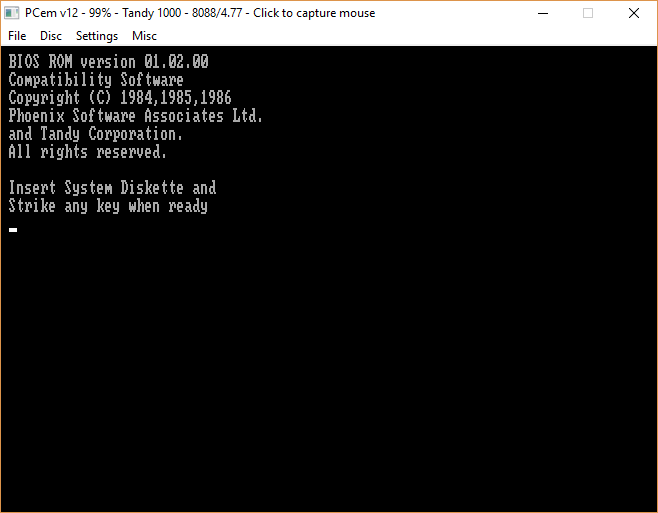 You can speed things up by opening the Settings menu and choosing
Configure… From there change the CPU: from the authentic 8088/4.77 (4 MHz) to 8088/16 (16 MHz) for nearly four times the performance boost! If only it were that simple back in the day?

Fortunately, the original Tandy 1000 operating system is online for download. Again it is still under copyright and though unlikely a copyright holder may decide to re-enforce that commercial ownership in the future.

In the PCem directory, create a subdirectory to store the Tandy 1000 operating system. I use C:\PCemV12Win\floppy\tandy\. Extract d1000.zip to the directory and inside you will find two .DSK files and a README.TXT.

The images are “raw” copies of the original 360kb floppy disks included with the Tandy 1000 computer. These will work with PCem but they need to use a .IMG, .IMA or .FDI filename extension. So in a command prompt rename the two files with .DSK extensions to .IMG.

If your mouse gets captured by PCem, click the middle mouse button or tap Ctrl–End to return it.

Now go to the File menu and select Ctrl+Alt+Del to reboot the emulation with MS DOS. Press Enter to skip the prompts for the current date and time. Now you should be in a MS-DOS prompt at the A drive. You can play around with some DOS commands. 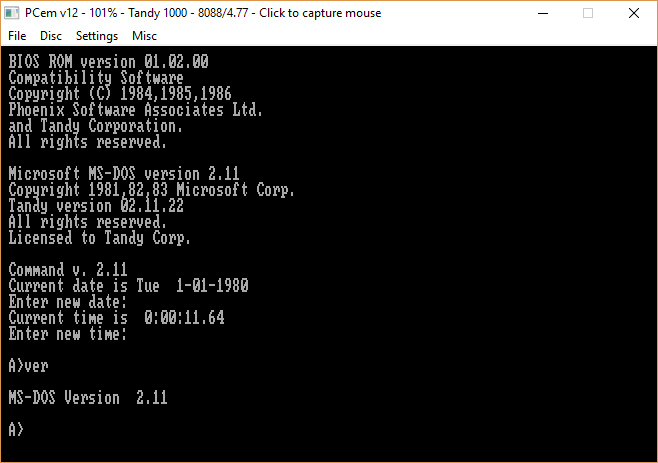 MS-DOS version 2 is bare-bones, but it now allows us to launch other software for the DOS platform. Open the PCem Disc menu and select Change drive B:…. Select c:\PCemV12Win\floppy\tandy\DESKMATE.IMG. Now at the A> DOS prompt input B:.

dir *.exe will list ten different executable programs. Much like in 1984 we have to take an educated guess and assume DESK.EXE is the correct executable to launch Deskmate. 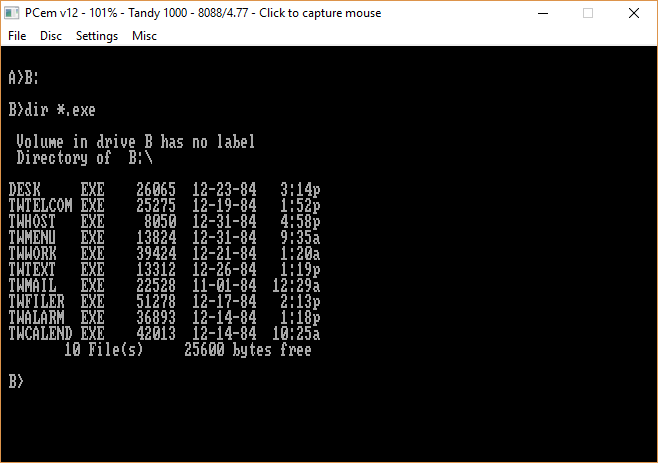 Deskmate is typical of home productivity software of the era, clunky and somewhat pointless. If you want to embrace 1984, the original Tandy 1000 PDF manual 1kguide.zip has a walkthrough. Chapter 3 onwards covers Deskmate usage, otherwise tapping the F12 key should exit, but it doesn’t seem to work for me. I have to use the File Ctrl+Alt+Del menu option to “soft” boot the emulated computer.

PCem has an open method of dealing with various system configurations. And as such, I try to be as descriptive as possible when naming these saves. First, create a new subdirectory within c:\PCemV12Win called configs.

In PCem open the Settings menu and select Save configuration… Navigate to configs and name the configuration tandy 1000 deskmate 1.cfg and save.

Let’s run another piece of software that takes advantage of the Tandy capabilities. Download the Sierra Online 1988 Xmas card. Extract sierra.zip to a directory. Unfortunately, it comes in a ZIP format, not a floppy disk image format that our Tandy 1000 requires.

The only useful tool for this task on modern Windows is WinImage which unfortunately is $30USD shareware and was last updated in early 2013. But download, install WinImage then run it. 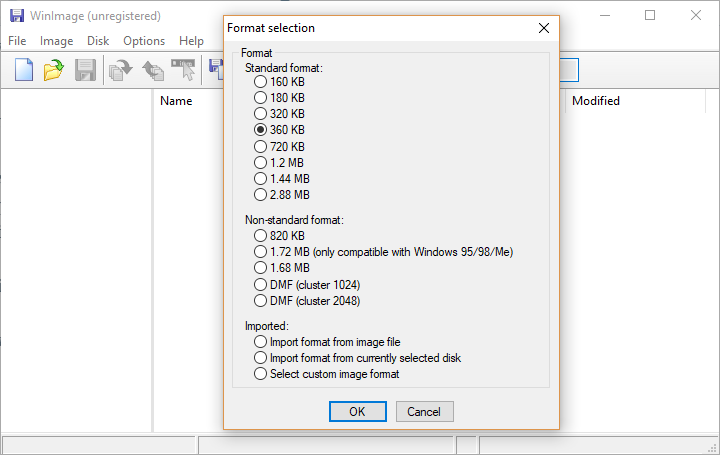 Back in PCem open the Disc menu and select Change drive B:…
Browse for and select sierra xmas.ima.
In the DOS prompt run the following.
B:
dir *.exe
install

That will launch the 3D Adventure Game Setup/Installation Program from Sierra On-Line, Inc.

Tap Enter to continue.
On the following Adapter/Monitor selection use the - (minus) key on your numeric keypad to navigate the options and select Tandy 1000 with RGB monitor and press Enter.
On the music/sound selection choose IBM PCjr or Tandy 1000 Internal Speaker and Enter.
Then select the Tandy 1000 Keyboard and Enter. Now you can finally use the arrow keys for the rest of the menu.
Select No and Enter for the IBM compatible joystick.
Select No and Enter for the MicroSoft compatible mouse.
Tap the Esc key when asked to install the game on a hard disk.
Press Enter when Setup is complete.

Now back at the DOS B> prompt type XMAS and Enter to launch the surprisingly long Sierra Christmas Card from October of 1988. At any time you can tap Alt Q to quit. 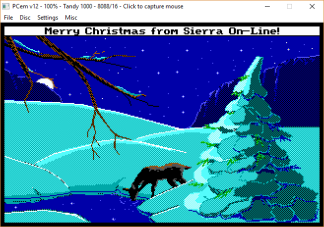 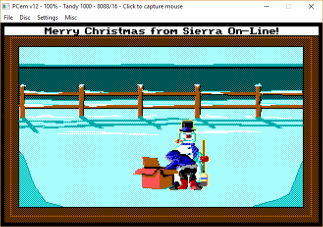 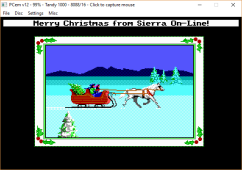 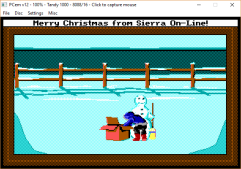 Well done you now have a working Tandy 1000 MS-DOS emulation. There are a lot more programs and files to play around with at Tvdog’s Archive.

In a future post, I will run through how to create a companion configuration of a generic IBM PC/XT with both a floppy and hard disk running DOS.